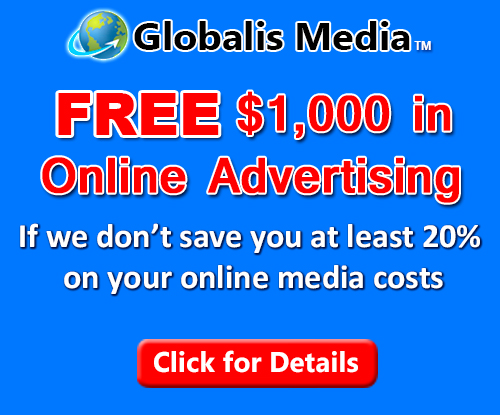 Globalis Media is a unique global online marketing solutions provider.
What makes us unique is our dedicated advertiser-centric approach
Most online media networks, exchanges, and platforms are publisher-centric.
On their web sites, they promise to help publishers earn the highest eCPM’s.
We are solely focused on achieving advertiser objectives as cost-efficiently as possible.

Most media agencies are essentially sales agencies for media publishers.
Most media agencies sell standard media offerings at full rates, with little creativity in media planning and buying, and mediocre campaign management.
Globalis is a media buying agency, totally dedicated to getting the best value for advertisers.

Most digital agencies or trading desks have one media platform they push, because they have a vested self-interest in that one platform. Maybe they have a commitment to only use that one platform, or maybe it’s the only platform they know how to use. Globalis Media currently uses ten different online ad platforms, including the top DSP’s in the world. Our media-buying and campaign management experts have world-class expertise in using various programmatic media-buying platforms and tools. We are platform-agnostic. Our only interest is in using whatever works best for our advertisers.

Our founder started his career as a brand manager, and spent years buying traditional and digital media. Active in the online media industry since 1999, he saw that the industry was publisher-centric. He decided to launch Globalis Media as an advertiser-centric online marketing provider that truly puts advertiser first. We often save online advertisers 25% – 50% on their online marketing costs.

We have run online media campaigns in more than 50 countries.
We run global, regional, national, and local campaigns.
We excel in geo-targeting and language targeting, which few agencies or advertisers use well.
Our people are smart, highly-trained, and responsive.
We are dedicated to providing the highest level of service to our clients and business partners.

Over the past ten years, Globalis Media has managed thousands of online advertising campaigns, run hundreds of thousands of creatives, and served tens of billions of impressions for more than 100 companies in dozens of countries. Partnered with several leading online media platforms and networks, Globalis buys media for clients at greatly reduced prices vs. typical online media costs. This enables Globalis to achieve very low costs for advertisers on all key performance metrics.

In 2010, Globalis relocated its office to Cebu, Philippines, providing a more central location than Tokyo to serve the company’s clients around Asia and globally. Cebu is a booming technology center, with a large pool of educated, skilled, English-speaking technology workers.

Hazel is the Chairwoman and Manager, HR, Admin, and Accounting for ExDigita. Before founding ExDigita, Hazel’s previous career experience includes recruitment for a leading BPO company, telemarketing for a mortgage broker, institutional sales for a food products distributor, and managing retail promotions.

British-American, Paul was educated in Europe and the US, and has lived in Asia more than twenty-five years. He has more than thirty years of consumer marketing and advertising management experience, including twenty years of online marketing and ad tech experience. Paul has won advertising industry awards, has been often cited in media, has hosted an online show about online marketing in Japan, has received industry accolades for web sites he has developed, and has pioneered several online advertising methods and technologies in Asia. Paul has helped more than one hundred companies with online marketing in dozens of countries. Paul earned his Master of International Management With Honors from American Graduate School of International Management (Thunderbird), and his B.A. in Political Science from Hobart College.

We are very proud of our talented team of hard-working online marketing professionals. We are very serious about the work we perform for our clients. At the same time, we enjoy working with our clients and with each other in a casual, friendly, and fun office environment.

Globalis Media is managed by Managing Director, Paul Anders Schwamm. British-American, Paul was educated in Europe and the US, and has lived in Asia more than twenty years. He has more than twenty years of marketing, advertising, and media experience in the US, Europe, Asia-Pacific, and Japan. Paul has won advertising industry awards for TV and Print ads, has been quoted in several articles, has hosted an online show about online marketing in Japan, has received industry accolades for web sites he has developed, and has pioneered several online advertising methods and technologies in Asia.

We have a great team in a casual, friendly, and fun office environment. We enjoy working with our clients and with each other. We are also very serious about the work we perform for our clients.

We hire smart, highly-capable people. Candidates for most of our positions take English and math tests, and we only interview those who score highly on both tests. For some positions, we ask to see a portfolio of candidates’ past work, and we may ask candidates to take additional tests. We look for people who are mature, responsible, dependable, trustworthy, honest, professional, and who conduct themselves with a high level of integrity. People who are hard-working, diligent, organized, detail-oriented, pro-active self-starters, able to work without close or constant supervision are the best fit for working in Globalis Media. Common sense, good business judgment, and a good sense of process flow are also important.

For many of our positions, it’s important to be good at good at developing and maintaining business relationships (via phone and email), and this usually requires very good written and oral communication skills in English.

Our people must desire to constantly learn new knowledge and develop their skills, because the online industry is constantly evolving, with new technology all the time.

In addition to all required benefits, we have extra benefits such as an annual loyalty bonus paid for each year a team member stays with the company, and free “help yourself” beverages and snacks. We are also active in contributing to our local community via charitable giving and events.

If you are interested in joining the Globalis Media / ExDigita team, please click below to view more details and descriptions of available positions on the ExDigita web site.

Organizations and events we have supported in the past include the following: On June 30, 2016, Globalis Media/ExDigita once again took supplies to the Missionaries of the Poor “Little Lamb Center”. On July 2, 2015, Globalis Media/ExDigita once again took supplies to the Missionaries of the Poor “Little Lamb Center”. We spent time with children having Cerebral Palsy, many of whom are also blind. On December 4th, 2014, Globalis Media / ExDigita employees once again hosted a party at Jollibee for orphans, with our special guests this day from the Children of Cebu Foundation orphanage. The kids, their social workers, and our company team all enjoyed the party a lot. On August 8, 2014, Globalis Media/ExDigita took supplies to the Missionaries of the Poor “Little Lamb Center”, which provides care for orphans and elderly with special needs — mostly kids with Cerebral Palsy, many of whom are also blind. We spent time with some of the children, who are, indeed, “special”. They gave us much more than we gave them. On October 4, 2013, Globalis Media/ExDigita employees brought food and supplies to Gasa sa Gugma (House of Love), and visited with residents. On December 28, 2012, Globalis Media/ExDigita was a sponsor of Pasko sa Kabataan arranged by Parish Youth Coordination Council and was held at Our Lady of Sacred Heart Capitol Parish. Children in need enjoyed games and entertainment and received gift bags and meals funded by sponsors. Brother and sister from two separate orphanages reunited at the orphans’ dinner and games event.

All of us at Globalis Media / ExDigita know that we are fortunate in many ways, and it is important to all of us that we share our good fortune with less-fortunate members of our community. We are committed to continue our efforts to help those in need in our community.

Submit an inquiry or RFP to see how much you can save with Globalis Media! Sign up for Newsletter
X